Creator of the Sandler methodology and Founder of our organization

Based upon that belief, he developed a system allowing sales professionals to interact with prospects and clients in an honest, no-nonsense way, and get still get successful results, while preserving the sales person's self-respect. He founded a dynasty teaching others how to do just that. 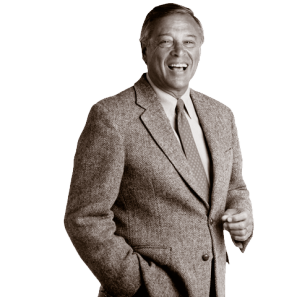 How it All Started

Something was wrong, and David Sandler knew it. It was 1966 and the struggling, young salesman was troubled by the forced, rote way in which he had been trained to sell. It didn’t feel right, and what's more, it didn't work.

So on his own, he decided to take charge of his sales calls. He started by making “verbal contracts” with his prospects—effectively challenging them to convince him to sell rather than trying to convince them to buy. His approach was radical. Unorthodox. Non-traditional. And dramatically effective.

Sandler refined his sales philosophy into a comprehensive selling system, and founded the Sandler organization to share his unique approach with other sales professionals. Since his revolutionary methodology was founded on basic principles of the psychology of human behavior, it has stood the test of time. 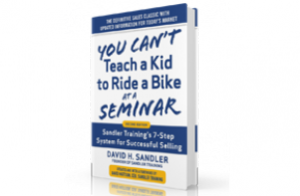 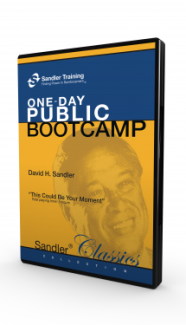 Part of the digitally remastered Sandler Classics Series, this recording captured David Sandler in an all-day workshop with a 120 sales professionals.

Go to the Sandler Store and purchase

"The Sandler Selling system gives the salesperson equal footing with the prospect in the Buyer-Seller dance."